For a long time, the server and data center fields have been the world of x86 CPU architecture. However, with the diversification of market demand and application load, and the continuous evolution of cloud computing, edge computing and high performance computing, RISC-V, ARM and other architectures have also ushered in new opportunities for explosion, especially ARM, with many giants participating in it, and ecological construction is also in full swing.

Marvell’s name may not be familiar to many people, but this long-standing semiconductor company is always around you, such most of the mechanical hard disk masters are written by Marvell., SSD master control also has a wealth of products. 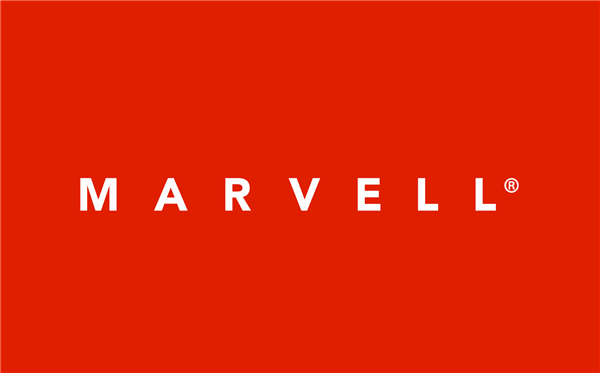 Marvell was founded in 1995, with its headquarters in Santa Clara, California, USA. It has set up research and development centers in the United States, Israel, India, Germany and China, with more than 5000 employees and more than 10,000 patents worldwide, with an annual income of 2020 US dollars in the 2.7 billion fiscal year, its core business covers three major fields: storage, network and computing, especially with more than 15 years of high-performance multi-core CPU research and development experience. 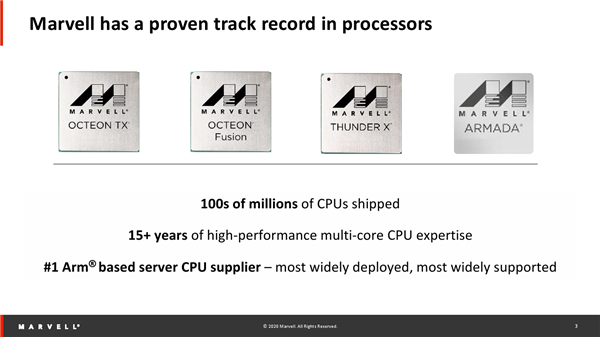 Since there is a mature x86, why should ARM be vigorously promoted? What does it attract to the whole industry?

Marvell believes that ARM has shown better quality in architecture, technology, performance, energy efficiency, ecology and other aspects, although it will not and cannot replace x86 in all aspects, however, in some specific fields, especially cloud computing and high-performance computing, it has obviously surpassed x86.

In terms of architecture, x86 has always been an architecture that dominates the world. From server data center to desktop notebook consumption level, different products are derived from the same architecture, which lacks flexibility, especially in parallel processing, moreover, the larger the scale, the more the cost and power consumption cannot meet the demand.

In terms of technology, Intel has lost its leading position, and the Xeon series is still 14nm, AMD although it has reached 7nm, it is “clever” to use chiplet multi-chip on the architecture, resulting in obvious shortage of memory bandwidth and memory delay. ARM has followed TSMC to 7nm all the way, and is about to enter 5nm. 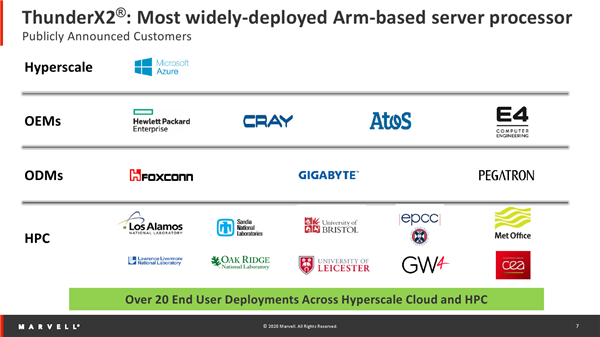 In terms of ecology, x86 has a long history, but the burden is also very heavy. For example, considering various histories and even consumer-level compatibility, ARM does not drag too much, and the architecture is directly generated for server optimization. 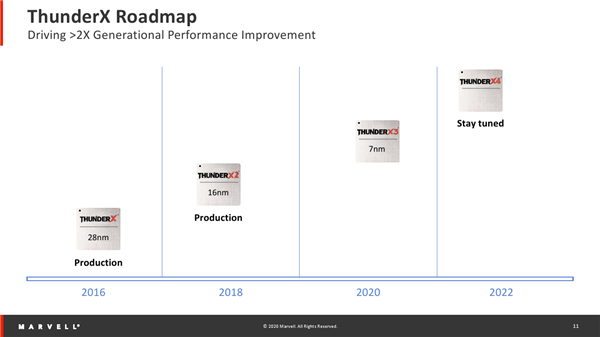 Next, let’s talk about specific products. Marvell ThunderX series strictly follows the roadmap of upgrading generation every two years. The ThunerX2 series was born in 2018. After today’s leading role ThunerX3, we will also see ThunerX4 in 2022. The process is also upgraded all the way, 28nm, 16nm, 7nm…… 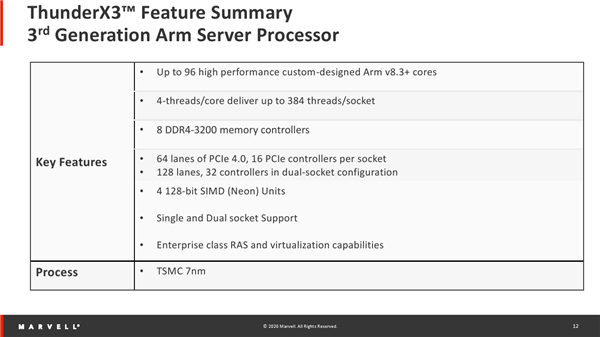 ThunerX3 is manufactured by TSMC 7nm DUV process and based on Marvell’s independent research and development architecture. The instruction set is compatible with ARM v8.3, with up to 96 cores, and continues to support 4 threads, that is, up to 384 threads, it is exactly three times that of the previous generation and supports two-way parallelism. At this time, a single system can provide 128 cores and 768 threads.

At the same time, the frequency aspect the reference is up to 2.4GHz and the acceleration is up to 3.1GHz., 100MHz higher than the previous generation.

Memory Support eight-channel DDR4 with a frequency of 3200MHz, and support 64 PCIe 4.0(16 controllers), which is further than the previous generation PCIe 3.0 and adds 8 channels, and will be upgraded with the evolution of PCIe 5.0/6.0 standard in the future.

Of course, enterprise-class RAS and virtualization are all essential elements. 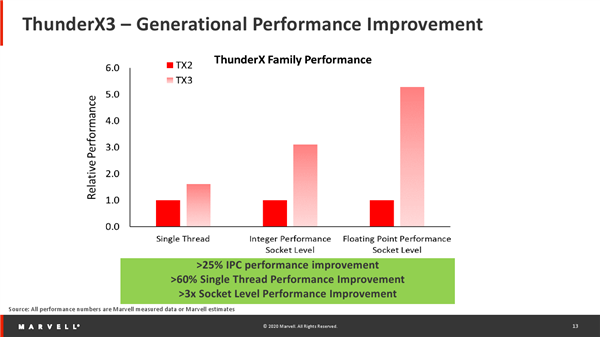 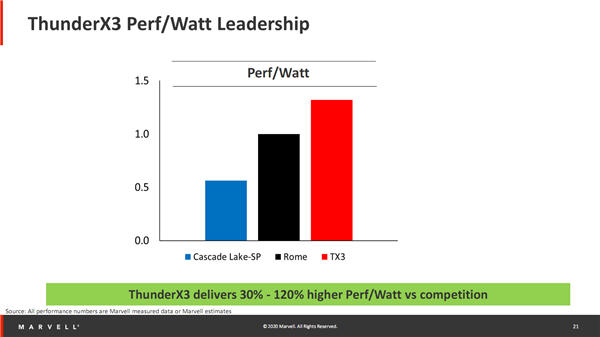 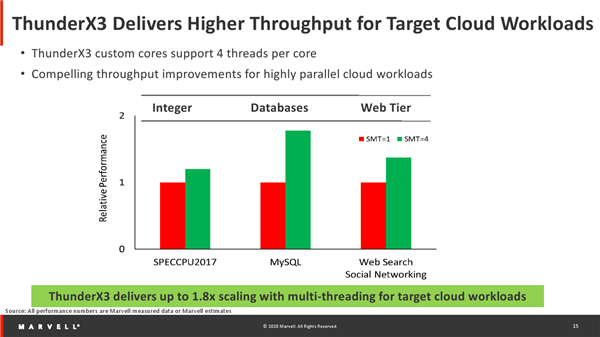 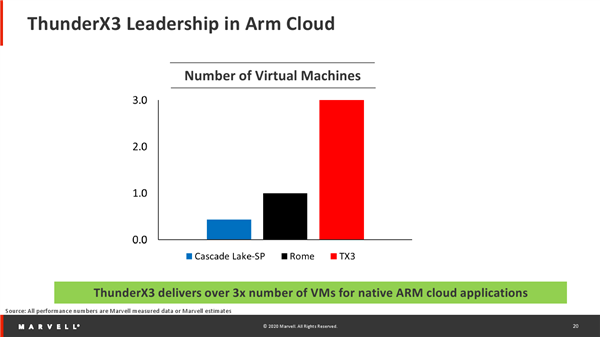 In terms of performance, single core and four threads can bring considerable performance improvement, up to 80% in common applications, and even 3-4 times improvement under specific load. 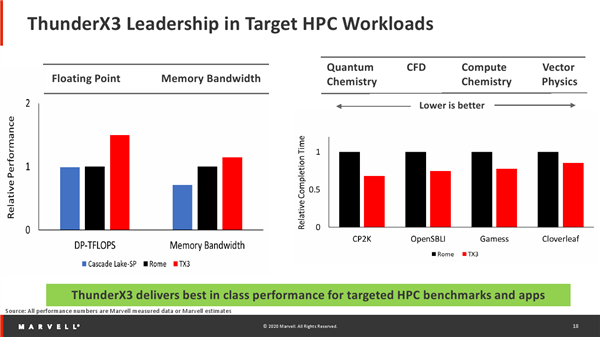 Marvell is also very optimistic about the market prospect of ThunderX3, revealing that more than 20 customers who are deploying ThunderX2 are now preparing to upgrade ThunderX3, and the subsequent ThunderX4 will continue to bring about a significant improvement. 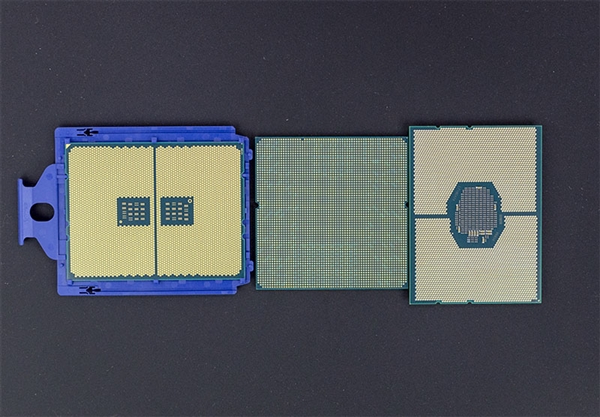 In the middle is the previous generation ThunderX2